How to botch a great recording

My CD of the week is a premiere major-label recording of music by Grazyna Bacewicz, a composer unknown outside Poland and not widely cherished within. It’s the product of a passionate affinity by the pianist Krystian Zimerman and four young colleagues and it is every bit as challenging and beautiful as I had hoped.

All that is missing is explanation. The value that big labels used to add to records was deep background on the composer and the music. Deutsche Grammophon appear to have given up on that department. Without elucidation, the music can be tough to crack.
The entire project risks spoilage for want of the kind of editorial attention that was once standard on big labels and is now almost invisible. My delight at DG’s great discovery turned to despondency at the mind-sapping lack of information.
I attach the full review below, since the scena website has a temporary bug. Do not hesitate to hear this disc. Rush out and grab it. 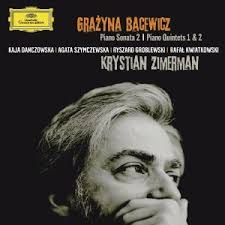 CD of the Week/Norman Lebrecht

Almost everything about this disc is wrong, except the
music. Bacewicz (1909-69), a well-kept Polish secret, wrote music of quiet
subtlety and profound introspection, adhering to no single style and managing
to avoid interference or patronage by the Communist regime.

Little is known of her life. She started out as a violinist
and led the radio orchestra in Warsaw for two years before the war. Abroad, she
studied composition with Nadia Boulanger and violin with Carl Flesch. She
stopped playing after a road smash. In addition to writing music, she published
a number of short stories. She married, and had a daughter.

None of her work has appeared before on a major label and
its release here is due entirely to the passion of Krystian Zimerman and a
quartet of compatriots who join him in two quintets, separated by the
self-assertive second piano sonata.

In such obscure circumstances, one might have expected an
informative essay on Bacewicz, life and work, in the accompanying booklet.
Instead, we get a publicity puff for how Zimerman came to record it and little
more by way of introduction or analysis.

Record labels, at their best – remember their best? – exist
to educate, entertain and disseminate. DG fails here even to make clear whether
the recording is live or a studio performance. An executive producer is named.
He ought to be locked in a small room with an empty revolver, or sent on
holiday for a very long while.

The redeeming grace is the music, which becomes more
hypnotic on repeated listening. Bacewicz is unafraid of shifting styles. The
first quintet, dated, 1952, is generally tonal and occasionally minimal; it has
an irresistible grave third movement. The second, from 1965, shimmers
along a serial line in a manner reminiscent of the young Ligeti. In between,
the sonata recalls the late Prokofiev. This is music that demands to be heard,
in performances of great fervour that conjoin a master pianist with emerging
artists Kaja Danczowska, Agata Szymczewska, Ryszard Groblewski and Rafal
Kwiatkowski. The musicians have done their job. Shame that DG botched the
chance to support their enterprise.