Dame Joan gets a royal send-off at the Abbey

The last of the great divas, who died in October, was celebrated this morning in the kind of service of thanksgiving that leaves other faiths lagging far behind the Church of England in hymnody and dignity. The Prince of Wales was there, representing the Queen; Australian London was out in force; and at the first C from the organ hundreds of singers, solo and chorus, active and retired, all of them wrapped in winter coats, gave voice in praise and gratitude for the life of dear Joan.
No fancy ceremonies, no blaze of glory – she would never had stood for that. Joan she was when she got off the boat with her Mum in 1951 and Joan she remained to musicians and friends through the years of struggle at Covent Garden and the decades of accolades that followed.
The orchestra of the Royal Opera House under its music director Antonio Pappano accompanied the service. A young Sydney soprano, Valda Wilson, presently attached to the Semper Oper at Dresden, sang Fauré’s Pie Jesu and the Alleluia from Mozart’s Exsultate Jubilate with the perfect amalgam of vocal poise and unblemished innocence.
There were quiet, carefully understated readings from Norma Major, wife of a former UK prime minister and a Joan Sutherland biographer, and from Richard Bonynge, the diva’s husband and guide. Sir John Tooley, the former Covent Garden administrator, gave a dry account of an extraordinary life borne by an unassuming person. ‘Joan would have loved it,’ murmured one of the old-timers around me.
Twice we heard her voice on record – in Let the Bright Seraphim from Handel’s Samson, and Casta Diva from Bellini’s Norma. In the vast heights of the Abbey the voice took flight. Yet, even as we stood to appreciate the life, one knew that the sensation was unrepeatable. 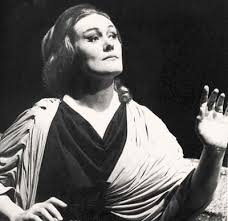 When Joan sang Casta diva in the opera house in the middle of the last century, there was no louder sound on earth. Today, the voice of a diva is dwarfed by amplified noises in the world around to the lesser status of a refined taste in a confined space. The awareness that we shall never hear her like again struck a sombre note of contemplation.
But this was not a moment for sorrow. The girl from the Sydney suburbs lit up the world with her voice, leaving a recorded legacy that will be admired so long as there is life on earth. « Miserable bitcheries at the Telegraph

Peter and Joan on the same sheet »