It's not the leaving of Liverpool…

Some folks just can’t stay away from the heat.

Over the weekend I had an email from Ed Smith saying he was going back to Mersey roots, and before I could digest that momentous news it has been outed in a press release (below).
Ed was the young manager of the Merseyside Youth Orchestra who groomed a kid percussionist called Simon Rattle. A few years later, as manager of the City of Birmingham Symphony Orchestra he gave Rattle, 25, his first grown-up job … and the rest is music history.
After Birmingham, Ed managed the Toronto Symphony Orchestra and the Gothenburg Symphony, where he hired a kid conductor called Gustavo Dudamel.
And now he’s back, part-time, as artistic advisor to his alma mater, the Royal Liverpool Philharmonic Orchestra, which is riding high with Vasily Petrenko as conductor.
It’s good for Ed, great for Liverpool, and very heart-warming for those who like to believe that what comes round, comes round.
The vacancy he moves into was left by Andrew Cornall, who has joined EMI as A&R chief. 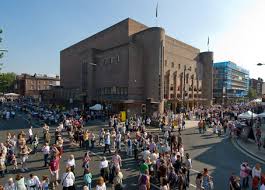 He takes up the role with immediate effect following Andrew Cornall’s departure to EMI Classics where he has been appointed Vice President of Artists and Repertoire.

Ed’s role will include the provision of artistic management support to the Chief Executive and Executive team and providing leadership focus to the Orchestra and Ensembles department whilst a new Executive Director is appointed.

A Liverpudlian, Ed began his career in orchestral management at Liverpool Philharmonic as a “dogsbody” after graduating with a degree in music from Durham University. He was manager of the Merseyside Youth Orchestra where he first met Simon Rattle as a 15 year-old percussionist. He became Deputy Chief Executive in 1975.

At 27, (the youngest orchestra CEO in Britain at the time) he was appointed Chief Executive to the City of Birmingham Symphony Orchestra where he stayed for 22 years. During his time there, he installed a 25-year-old Simon Rattle as principal conductor and began a professional partnership that established the orchestra’s world-class credentials. He was also instrumental in the conception, design and building of Symphony Hall.  Ed has since worked with orchestras worldwide including the Toronto Symp
hony, the China National Sym
phony in Beijing and Gothenburg Symphony Orchestra where he appointed Gustavo Dudamel as Music Director in 2006. He returned to the UK after 6 years in Sweden to pursue a freelance career.

On Ed’s appointment, Michael Eakin, Liverpool Philharmonic’s Chief Executive said:  “Ed joins a fantastic senior team who have played a major part in driving our current achievements alongside our Chief Conductor, Vasily Petrenko, musicians and staff.  He brings with him a wealth of experience of working in the national and international orchestral sector at the highest level and will provide an important contribution to our strategic planning during this interim period.”

Ed added; “It’s wonderful to be back working with this great orchestra in this great hall after starting here 41 years ago. It’s an extraordinary coincidence that Deputy Orchestra Manager, Jane Moss recently returned here from working with orchestras in London – she typed my appointment letter in 1970! Liverpool attracts! I’m looking forward to working with Michael, his colleagues and the musicians in ensuring that symphonic music thrives as it always has done in this great city.”

More about Ed Smith at www.edsmithconsulting.com

« Breaking moulds in the agency business