Find me a concertmaster

In the February issue of The Strad, I discuss the declining status of the orchestral concertmaster – once as important a figure as the maestro but now increasingly invisible. Why is that?

There was a time when, woken in the middle of the night, I
could rattle off the names of concertmasters in great orchestras the way a
schoolboy recites his football team or a whisky priest his catechism.

At Karajan’s left knee in Berlin sat Michel Schwalbé, the
expressionless Holocaust survivor. In Vienna, it was Rainer Küchl, young before
his time. Hermann Krebbers personified the Concertgebouw. Michael Davis led the
flash-Andre mob of the LSO. Rodney Friend kept the New York Phil in tune for
Boulez and Mehta. Samuel Magad ruled the line in Solti’s Chicago.

And it was not just world leaders who gripped the
imagination. Malcolm Stewart two-timed in Liverpool and Toulouse. Haim Taub was
a national institution in Israel. Steven Staryk held sway in Toronto. Christopher
Warren-Green at the Philharmonia was always poised for a maestro to stumble so
he could take over. The concertmaster, 30 years ago, was almost as much the
public face of an orchestra as its chief conductor and generally more
responsible than him for maintaining morale and tone….

And who’s this on the cover? 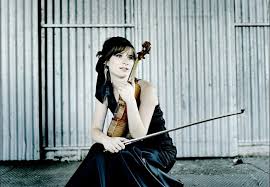