A German musicologist by name of Clytus Gottwald has retrieved three songs by the young Alma that Mahler dismissed as trash and set them for a capella choir. The premiere will take place in Stuttgart on February 26 in a concert conducted by Marcus Creed. The songs are titled Die Stille Stadt, Laue Sommernacht and Bei dir ist es traut. Details are listed here.

Clytus Gottwald, 85, is founder of the Stuttgart Schola Cantorum, a former IRCAM associate of Pierre Boulez and an expert in musical paleography – the art of reading old handwriting. I can’t imaging he – or anyone else – would have wasted precious time on the doodles of an untalented teenager, had she not become the love object of a great composer. There have been several attempts to make more of Alma’s sings than is actually in them – the best being the orchestral versions made by Colin and David Matthews – but after more than one listening it is hard to escape the conclusion that Mahler was right: she had nothing to say in music – 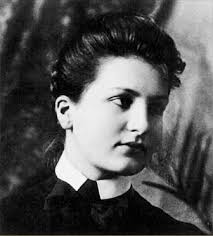 unless, of course, her third song was a sketch for a bigger hit, sometimes attributed to Mahler. Now that would be a world premiere…