Dude to go on Tonight Show with Jay Leno

Yes, you read it right. A real-life classical conductor is going on prime US network television at the start of the New Year. He might even get to talk about music (perhaps not at symphonic length). When, since Leonard Bernstein in 1943, has any young conductor received such national exposure?

It’s a huge step-up for Gustavo Dudamel to the next celebrity rung. I reckon he can handle it.
Here’s the press release, hot off the email:

GUSTAVO DUDAMEL TO APPEAR ON NBC’S

“THE TONIGHT SHOW WITH JAY LENO”

WHAT:              LA Phil Music Director Gustavo Dudamel guests on NBC’s “The Tonight Show with Jay Leno,” Tuesday, January 4, 2011, at 11:35 p.m. In his first appearance on the national late-night program, Dudamel discusses, among other topics, LA Phil LIVE, which sends full-concert performances of him leading the Los Angeles Philharmonic at Walt Disney Concert Hall to more than 450 movie theaters across the U.S. and Canada.

Dudamel is currently in the middle of his second season leading the LA Phil. The LA Phil’s 2010/11 season presents a vast spectrum of imaginative concerts – welcoming back old friends, while continuing the tradition of introducing rising artists and composers – a European tour and expansion of YOLA (Youth Orchestra Los Angeles), Dudamel’s signature music education program.

“The Tonight Show with Jay Leno” is from Big Dog Productions in association with Universal Media Studios.  Debbie Vickers is the executive producer. 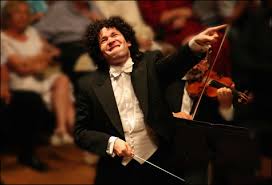